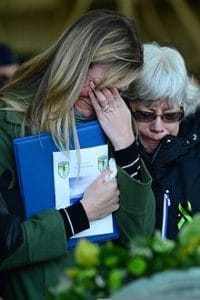 Niamh trained in the Critical Incident Stress Response (CISM) model in 2004 and later retrained (in line with updated research) in Psychological First Aid (PFA).  Between the years 2004-2009 Niamh was one of Ireland’s main responders in the aftermath of a bank raid (almost weekly events for a time) or Tiger Kidnapping. Her role is to be onsite within the first few days after a serious incident, to prevent trauma and help people readjust to normality after experiencing something so abnormal. Today there are (thankfully) fewer bank raids, but Niamh is still called on to respond to incidences such as:

Niamh will fit the response to the needs of the organization, usually offering group facilitation followed by one to one availability, aswell as advising and supporting organization leaders & HR to effectively respond to the needs of their team. Early intervention and the appropriate support can help to limit the negative impact of the incident on individuals and on the organization, and helps prevent the development of Post-Traumatic Stress Disorder.

As well as responding to Critical Incidents, Niamh is also available to train your staff in responding to these types of incidents in the workplace. This is a 2 day training in the principles and practice of Psychological First Aid. Contact Niamh for details.

In association with The Wellness Crew, Niamh has worked with Cognizant to support their people in Facebook and YouTube in their role of literally cleaning up the internet. Many technological employees are dealing with extreme online content, often of a violent or deviant sexual nature. This exposure puts them at risk of being traumatised themselves. In order to support and protect employees, Niamh has been engaged (2018/19) to give resilience training at induction level and also provide 1to1 support to employees who may have been affected by the material they are working with.

I found Niamh’s course very calming at a time of high emotion.

I found this course comforting and calming in a chaotic period of time.

Niamh have me more awareness of how to bring my head back to the moment and not to fear change. Be aware of my emotions.

I feel a little bit more equipped to cope with the future.

Niamh has facilitated hundreds of workshops, talks and trainings for companies and organizations. Please Call On +353 87 997 5226 or email niamh@mindworks.ie.

We use cookies to ensure that we give you the best experience on our website. If you continue to use this site we will assume that you are happy with it.OkPrivacy policy